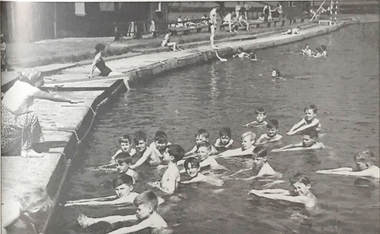 Pupils of Penrith Boys' National School kept cool in an open-air 'classroom' when they visited the bathing place of Penrith Swimming Club, in the River Eamont at Frenchfield. The instructress, Mrs. Cuthbert, demonstrated strokes from the bank.

A pyramid of prizewinners at Penrith Swimming Club's gala in the river pool at Frenchfield 1957. Towards the left on the front row is Ernest Dalton, a vice-president, who presented the prizes. Towards the right is club president and former long-service secretary William Brown
Credit: Time of Change - Eric Davidson 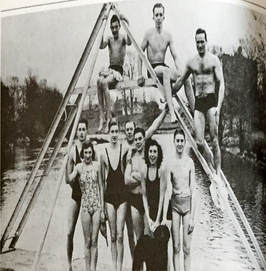 Credit: Around Penrith in Old Photographs - Collected by Frank Boyd 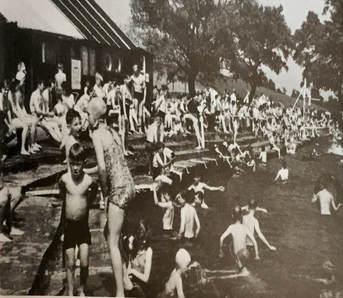 Penrith Swimming Club's stretch of the River Eamont at Frenchfield was a busy place at the height of the summer. Founded in 1881 by Alderman J. Simpson Yeates, it was originally for men only; when women were eventually admitted special times were reserved for them. The club went from strength to strength with a record membership of 1,140 in 1933.

Credit: Around Penrith in Old Photographs - Collected by Frank Boyd