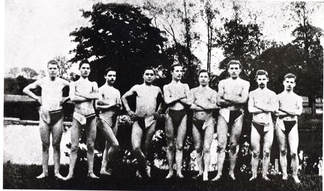 The first gala which the club held took place on 17th August, 1882, and it was followed by a picnic. Among the swimmers taking part at these first sports were Messrs., Yeates, John Thornborrow. Robert Huster and S. Sinkinson while the starter was the Rev. J. Sharpe Ostle (Also Rector of Skelton). The Rev. W.F. Gilbanks was judge, and Mr. R. Griersone, Chemist, Referee.

From that time onwards the Penrith Swimming Club Gala had always been a popular event with the public of the town and district, for a number of years, starting in 1884, foot races were held in connection with the river sports.
The rapid growth of the club’s popularity is evidenced by the fact that in the second year of its inception, its membership was more than quadrupled, while in 1884 it reached the total of 105, which, in those days, was considered eminently satisfactory.
​
The club had many stalwart supporters in those early days. One of its keenest members was Mr. Jeffrey Bewsher, tanner, Penrith, who took an active interest in the club until shortly before his death in 1905. Only one of the early members still bathes. He is Mr. William Barclay, William Street. Mr. Barclay became a member of the club through the church of England Young Men’s Friendly Society in 1882, and became a full member in 1884, in which year he was presented with a silver medal by virtue of his of being first in the 130 yards foot race handicap run in connection with the gala. Since that time Mr. Barclay has been one of the most prominent members, and , one day each week during the summer months, rain or shine, he goes down to the river for a bathe accompanied by several other members​
​